A Martian by any other name... 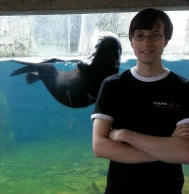 Hi everyone, my name is Alexander Wesley Marion, and I am a Mars One applicant! And hopefully that does not sound like an AA confession. I'm proud of what I have achieved in my life, and now I have the opportunity for the achievement of a lifetime: to be the first person on the red planet!

It all started a little after midnight on August 16th, 1987. A boy was born as a triad formed among the Earth, Moon, Sun, and major planets in our Solar System. It didn't happen right away, but eventually his parents decided to name him Alexander Wesley. Today, he goes by Alex, or Lex, just don't call him "Al." An imaginative chap, Lex always kind of had his head in the clouds... or more accurately, among the stars. Writing, drawing, taking apart televisions, Lex always wanted to be doing something other than what he was probably supposed to. This planted the seed for the man you see today. Eventually earning his Bachelor of Honours in psychology in 2012, not a year later he found himself without purpose, and he was not okay with that. Purpose is what has driven this young man his entire life. Searching for that meaning, that thing for which when he lays on his death bed, can reflect upon his existence and say, "Hell yeah, that was awesome!" In other words, he made a real difference. Although he never imagined making such a difference as being the first interplanetary colonist, when his father told him about the mission, he was hooked. Lex knew this was his calling, his purpose.

A Few Words About Me

First and foremost, I am a scientist. I value logic, reason, and scientific observation over perception and belief. As a psychology graduate, I am acutely aware of how bias we are, and prefer not to rely on things like intuition when more reliable methods are available. That being said, I am still a very imaginative and creative person. Since I can remember I have loved drawing, writing fiction, or just daydreaming about miraculous happenstances. I love to fantasize and wonder "what-if," even if that what-if contradicts every scientific fibre in my body. I mean hey, who doesn't want unicorns to be real?! My philosophy is: question everything, doubt nothing!

My passions in life, aside from science, include music, gaming, and adventuring! As contradictory as all this might seem, I love to do everything from sitting at home watching Star Wars, to hitting a bar with friends, to going camping for fishing with my dad. As much as I want to go to Mars, Earth is still a pretty amazing place to live, so why limit yourself when there are so many wonderful things to see and experience?

The human race has become stagnant. Movies and books have us believing that some higher being will provide us with some higher purpose. So we sit and we wait for something better to come along. The reality is that nothing is going to guide the human race except the human race itself. It's time we start deciding where we want to go as a species. It's time to stop bickering; put aside our selfish ambitions and meaningless differences, start working together as people - just people - and make something of ourselves. More than that, to take action. Enough talk, enough debate, it's time to do something. Until we then, until people realize their own potential as individuals and as a collective and create a purpose, rather than waiting and hoping, we will forever be doomed to self-destruction through apathy.

The moon landing once gave us that glimmer of hope. It was in that moment that people all over the world saw what we could really do. Somehow we lost that, or it wasn't a dramatic enough example. Either way, I believe that the Mars One mission can do what everything else couldn't, and finally unite humanity with a higher purpose. Something more than survival or competition. I want to show every person a future not borne of violence, or politics, or economics, but one of peace, cooperation, and unity. To show everyone that we can... go to Mars!